WARNING: This post discusses blackmail and bullying that some readers may find triggering. From the FTC website: If you experienced non-consensual pornography, need help or advice, and you live in the U.S., call the Cyber Civil Rights Initiative’s crisis hotline: 844-878-CCRI (2274).

UPDATE 8.25.2020: After saying he would drop out, Brock Turner wannabe Aaron Coleman announced he would stay in the race for the following reason; he won, and people were urging him not to drop out.

A couple of things…

Those people urging him to stay are known as “assault apologists.” The same folks who wonder why Weinstein, Louis C.K., and others no longer have a career.

He won by a mere 14 votes and yet is acting like Christ descended from heaven to appoint him to run for office. Not for nothing, but voters are allowed to change their minds when presented with new information. (See: r/trumpgrets on Reddit).

Growing up poor in a broken family does not excuse your behavior. Plenty of Americans were born into poverty with a terrible family and managed to not commit sexual crimes and bully young women.

Aaron, stop excusing yourself when you accuse the media by focusing on what you did as a 14-year-old. The fact that you were so young makes it even MORE concerning, not less. A teenager who committed sex crimes is a danger to society.

Also, stop saying you’re running to fight for women. We can fight for ourselves. #DropOutAaron

ORIGINAL POST: If nothing is done, Aaron Coleman, a 19-year-old currently running a seat in the Kansas state House of Representatives, will soon represent the state. He won the Democratic primary by a mere 14 votes and has no Republican challenger.

This cannot happen. Here’s why.

Coleman has come under fire for his social media comments which suggested he would “‘laugh and giggle’ if a former GOP state lawmaker died of COVID-19” which tells me enough already. He’s too immature to be a representative if he thinks these kinds of comments are appropriate.

In a piece by the KC Star, the sick details are laid out for all to see.

Beginning in the sixth grade, he bullied a young woman relentlessly, which caused her to contemplate suicide. She said he was, “‘calling me fat, telling me to kill myself, like I’m never going to find anyone, like I’m worthless, just downgrading me every day.’”

Social media posts quickly followed after the article was published, with multiple women claiming the same.

Then, one woman bravely came forward and posted her story on social media. She said, “‘He got one of my nudes and blackmailed me with it and told me if I didn’t send him more, he would [send] it to all of my friends and family. And when I didn’t send him more, he sent it to everyone I knew. I don’t know how he got the picture. All I know is he’s an awful person and he should not be allowed to run for anything.'”

He obtained her photo without her knowledge, blackmailed her and followed through with his threats. That is a crime.

You know what Coleman said? It’s all true.

Again, this should immediately disqualify him. But his attempts to justify his criminal behavior add to this.

He blamed his actions on the fact that he was only 14.

That enrages me. In fact, I find it even MORE concerning that Coleman was only 14 when he illegally blackmailed someone for nude photos. What 14-year-old is so sick and twisted that, after a history of relentless bullying, they resort to BLACKMAIL?!

I have never met a 14-year-old so evil. At that age, most teens are just awkwardly meandering through high school, not plotting to destroy someone’s life.

You know who this reminds me of? Brock Turner. 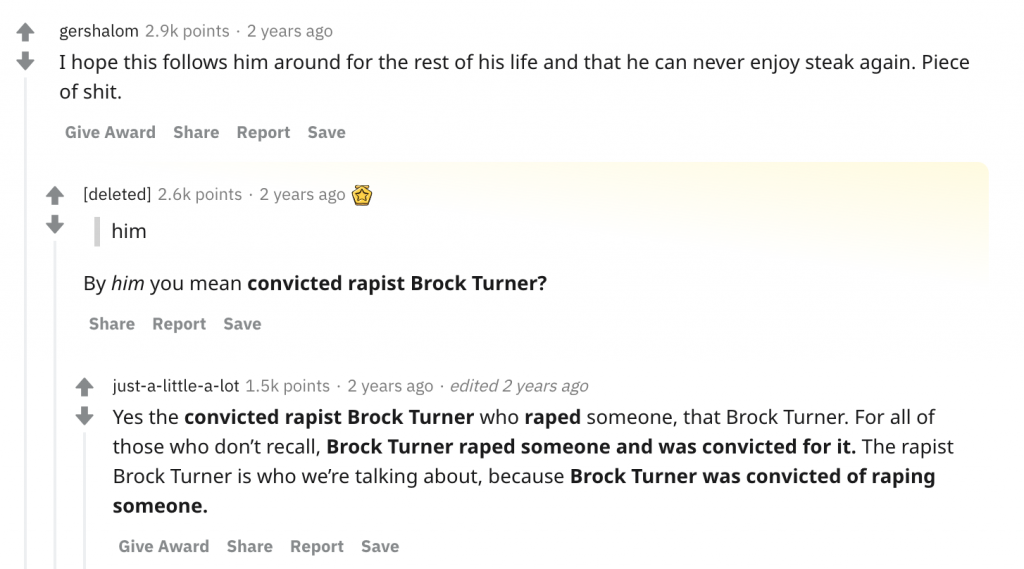 That site can be a real cesspool, but they’ll never let you forget Brock Turner, convicted rapist.

What do he and convicted rapist Brock Turner have to do with each other? Well, quite a lot.

Turner (convicted rapist) blamed his behavior on his alcohol consumption. Which, for the record, does not excuse his crime.

Meanwhile, Coleman took a similar route and blamed his behavior on the trauma of spending most of his school days in a closet as punishment. The AP reported that, “‘Doug Powers, assistant superintendent of the Kansas City-area Turner school district where Coleman went to elementary school, said it does not ‘put kids in closets.'” So that is also a lie and does not excuse his crimes.

Huh, they both tried to excuse and minimize their sex crimes. Checks out.

In addition, neither one was held accountable for their crimes. Recall that rapist Turner served a mere three months of an insultingly small six month sentence. It is not clear if Coleman was ever charged for his illegal crime in the first place.

His former opponent, Stan Frownfelter, a 69-year-old small business owner, has pledged to run as a write-in. Again, there is no Republican challenger. Writing in Frownfelter is our only option. This is district 37. When you see this on your ballot… WRITE IN STAN FROWNFELTER! Do not let this criminal win.

Vice: A 19-Year-Old Who Blackmailed a Girl for Nudes Just Won a Democratic Primary in Kansas

June 20, 2020 No Comments
PrevPrevious15 Local Kansas City Restaurants That You Can Support

When you’re between jobs, there are always budget-friendly options for making ends meet. Craig Brown from Your Career Boost teaches us how in this guest post!

If you’ve ever read an SEO guide on creating the perfect blog post that left you more confused than when you started, I sympathize. Blog

Lately I’ve been scrolling through a lot of my pre-covid travel photos. Why? Hard to say. I guess I just like to punish myself with