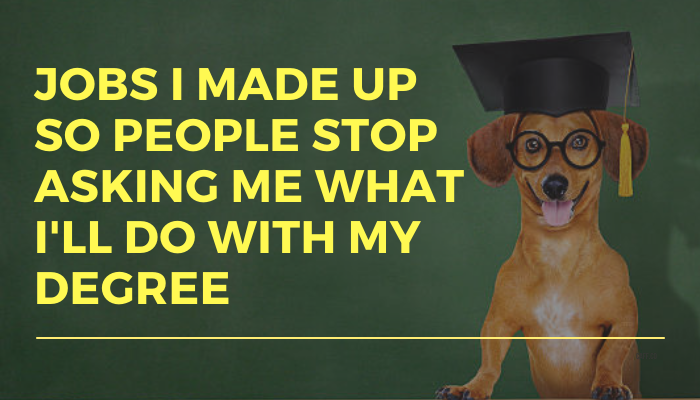 In case you’ve missed my multiple stressed, tearful posts… I’m getting my MBA.

Just waiting for your applause. I know, I’m amazing.

Just kidding. What I am is exhausted. Always, always exhausted. I never knew evaluating the longevity of Costco’s stock options would put me in a near-coma, but here we are.

Whenever I meet up with someone and brag about my academic achievements, the inevitable question arises… “So, what are you going to do with your degree?”

Now, I’ve already gotten a new role and duties in my current job, so I feel quite set. But if any of my fellow December grads are having trouble fielding this question, allow me to help. I present: a bunch of nonsense jobs that are yours to lie about. None  of these jobs are real. I made them all up over my lunch break. But if you genuinely don’t know what your post-grad plans hold, or your answers just aren’t enough for whoever happened to ask, here you are. Lie away!
1. “House Hunters” Armchair Psychologist

How many times have you watched an episode of “House Hunters,” only to immediately think “This couple is definitely getting divorced,”? Turns out, this is an actual profession! Skills of the “House Hunters” Armchair Psychologist include; predicting with a near 89% accuracy which feature the couple will argue over the most, and who will win out. Seasoned professionals are also able to use clues to find either spouses social media to determine if the couple is indeed divorced after all. Quartz countertops be dammed!
2. TV Show Reviewer Who Mostly Just Complains the Show Isn’t as Good as it Used to be
Just kidding, this actually exists. It’s called reddit.
3. The Subway Airhorn Manager

Not the restaurant. No, this hero rides the subway every day, in hopes of locating folks who listen to music full blast without their headphones. The subway airhorn manager, after giving an initial first warning, proceeds to blast his or her airhorn at top volume to show said subway rider what an unforgivable ass they’re being. It costs NYC tax payers quite a bit to maintain this position, as turnover is notoriously high.
4. That One Bitch on “Say Yes to the Dress” Who Always Insists the Bride Try on a Goddam Ballgown

Colloquially known as That Bitch on the long-running TLC show, she frequently appears as a family member or friend of the bride. The bride will often indicate that she dreams of a figure flattering A-line with a sweetheart neckline, but That Bitch just isn’t happy until the bride is miserably stuffed into a ballgown so that she “looks like a princess!” The bride is often visibly annoyed, because Kiersten always upstages her moments and just for one goddam day can she have something be about her for once?!

Occasionally, a loving family with healthy boundaries steps into Kleinfeld’s. That Bitch isn’t present, and the appointment should, in theory, run smoothly.

A wedding dress appointment? Run smoothly? Not on this network!

So, the big wigs at TLC will arrange for a Kleinfeld’s employee, used only in this capacity, to step in and fill the role. Satisfying the plot lines and viewers everywhere.

It’s like a bathroom attendant, but somehow even more useless. An automatic towel dispenser attendant is a fixture in every gas station bathroom. Their job is to stand in front of the towel dispenser, wave their hands and appropriately distribute said paper towels. If the machine isn’t working, then they’ll just continue to wave their hand until something happens. This is a undisputed shaky industry as automation is an ever-present threat.
Did any of these fake jobs get your relatives to leave you alone? Let me know in the comments!