5 Things I Learned on the Job Hunt 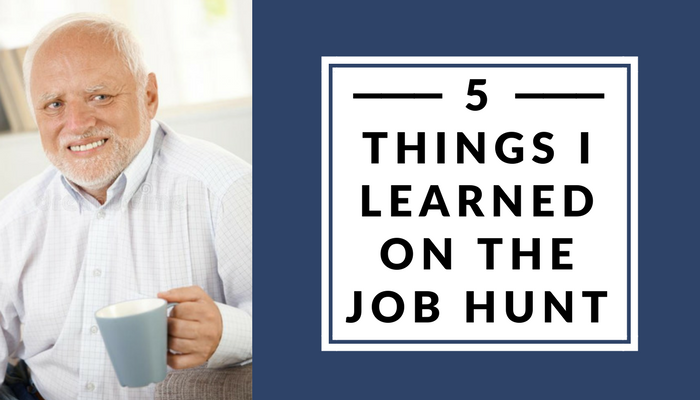 After leaving K-State in mid-December, I found myself in the very common position of having +1 degree but negative job.Technically, it was 0 job, but it really felt like negative.

There’s something about your first job hunt postgrad that makes you feel like the lowest of the low. Well, it’s not so much something as it is a combination of things; it seems like every single person in your graduating class has an amazing job waiting for them, the only gigs you can find in your field pay $0.02/hour, every practical thing you need is way too expensive and no one is responding to your emails. There’s more, but if I listed everything I’d be here all day and I’ve got a lasagna in the oven.

It took me almost four months to find the job I have now. It might as well have been a lifetime. The days seemed endless and were filled with panicked LinkedIn searches, resume updates and “Judge Judy” binge watching.

In short, it sucked.

But it’s over now, and the resulting emotions are akin to what I imagine finishing a marathon is like (assuming I’d ever have the strength/insanity to take that on). Sweet, sweet relief.

To my unemployed readers; you’ll get there, I promise.

But in the meantime, let me attempt to talk down all of the evil thought demons that have no doubt filled your head during your unemployment. Stick with me, I’m gonna try to show you the light at the end of the tunnel.

1. Social media is the devil.

If I could go back in time, I’d knock my iPhone out of my hand, or at the very least delete my social apps for a bit. At the time of my unemployment, I had hours and hours of time to myself. When I wasn’t job hunting, I was scrolling through Facebook, Twitter and Instagram. Obsessively.

One of the more frustrating aspects of social media is it can lead you to believe everyone has a more perfect life than you do. Everyone is on vacation, or working their dream job or enjoying their lives in general.
In a way, it makes sense. Why would you put a photo of how godawful your day at the office was on your social channel? It’s not really meant for that. But it sure made me think everyone was living some sort of fantasy that I had no access to.
Take my travel blogs, for instance. I loved Brussels, but I also stayed in what was maybe/definitely a murder house and couldn’t sleep. I was honest about it in my post, but if you think those photos made it to Instagram, they didn’t. Everyone has days when they feel like they’re stuck in a murder house instead of having lunch with Tonton Garby. Adjust that phrase as you see fit.

Many of my friends have discussed the infuriating disconnect between them and the Baby Boomer population when it comes to getting a job.
“They just keep saying, ‘Walk in and shake the hand of the man in charge! A firm handshake and you’ll be in the office in no time!'”
It worked for them. But it most certainly doesn’t work for us anymore.
Everything is online. You won’t meet your potential employer until the very end stages. They’re not able to see your wit or personality like they would in person. They’re going off lines on a resume.
No wonder Baby Boomers long for handshake days. Being reduced to words on a computer screen takes the human being out of the equation.And perhaps, most tragically…

Perhaps the most devastating effect of living in a world where everything is done online, is realizing we can never be like Elle Woods and hand in our pink, scented resume to a potential employer #endofanera

3. Your worth is not tied to your employment

You are so much more than what you do for a living. Repeat it. Again and again until you believe it.
I’m not sure where this issue originated, but a lot of my peers, and even Baby Boomers seem to struggle with this. We base our self worth on our job. When we don’t have one, we feel worthless.
I promise, you’re not worthless. Instead, think of all your gifts and talents you have outside of what you do for a living. I bet you have plenty.
For example, I’m the only one I know who can rapidly switch between accents at the drop of a hat. An Irish accent is my specialty, but I figure that one’s obvious. (No one grows up in an Irish Catholic family without being able to at least attempt an Irish accent, amiright?)

4. You didn’t fail because you’re back at your summer/college job

I took a retail job about a month into the job hunt, the same kind I had when I was in high school saving up for college. I felt so low. The drive to and from work was the worst. All I could think was, “Huh, this is the same stuff I did before college. Why did I get a degree when this job was what I got? I should’ve just stayed home.”
This is not to bash the service workers of the world. They’re doing the Lord’s work, for sure. It just hurt to find that everything I had done in college to get to the field I wanted had yielded (seemingly) no results.
But as the job search progressed, my retail gig became my lifeline. The hours at work kept me from going stir crazy on Indeed. The coworkers there were sympathetic to my struggles, exactly what I needed. And earning money meant I was able to…

which honestly, sometimes is much needed.

So you’re not able to get a job right away? In terms of absolute failure, that’s hardly the worst you could do.

You didn’t cause a nuclear holocaust.

You didn’t single-handedly cause the ending of “How I Met Your Mother” to suck so badly.You didn’t disappoint Mr. Rogers.
You’re perfectly fine, just the way you are.

April 30, 2021 No Comments
PrevPrevious20 Lies You Learn in Your 20s
Next7 Facts You Didn’t Know About Coach Bill SnyderNext