Final Thoughts on my Final Semester 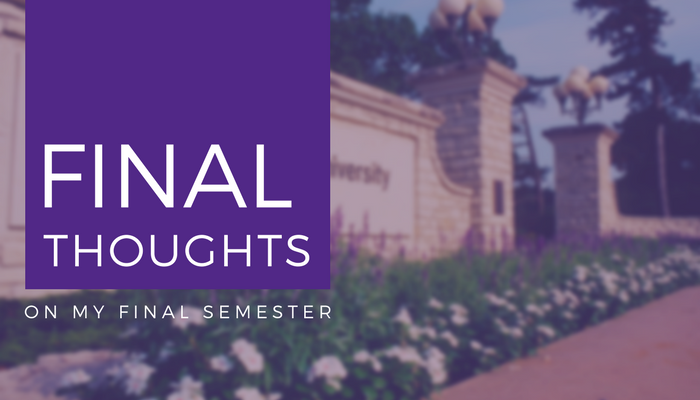 A few weeks ago, this gem showed up in my inbox.

I commend the Arts and Sciences department for their detail, although if they really wanted total honesty, they could’ve added something like, “By the way… this is the part where you start acting like an adult now.”So I ordered my cap, gown and tassel. At least I can do that right. I assume.

I’m more or less prolonging my head first dive into the adult world. Because I’m 22 and pretty sure I’m allowed a small chunk of irresponsibility. As long as said irresponsibility isn’t something like invading a small territory or naming my non-existent future child after a chapter in The Hunger Games.

Here’s the grand post-grad plan as of this morning; I’m heading home for an internship, then I’d like to chill abroad for a little bit. Probably spend a couple of weeks hanging around museums and doing other irritatingly artsy things. Also, I’ve never been to Europe. I hear good things.

Problem is, there’s absolutely no good way of phrasing this. “What are you doing when you graduate?” is probably the question that pays a minimum $10 to each asker, otherwise why would we all hear it so much?

Saying, “heading off to Prague to study post 1980’s European art culture,” makes me sound like an ass. So that one’s out. But, then again, “dropping money I don’t have on a plane ticket so I can see as many countries as humanely possible,” reeks of a post-grad Eat, Pray, Love vibe. Shrugging and saying, “I dunno, probs travel,” usually gets pitying looks. There’s no middle ground.

I also want to go to grad school at some point. But that’s an even vaguer plan. I bounce between wanting to get my MBA to wondering if there’s a marine program that will let me stare at baby turtles for two years. Decisions, decisions.

These aren’t exactly comfortable conversations to have because it almost always reveals how woefully unprepared I am for everything that will go down after the ceremony.
Person: So, I mean… what do you want to do?
Me: For dinner? I’ve got leftover pasta in the fridge, it’s taken care of.
Person: No, what you want to do with your degree?
Me: Ideally, use it. Be employed.
Person: Anything specific?
Me: Something that pays me in U.S. dollars.
Person: So… no idea.
Me: Not a goddam clue.
Anticipatory graduation anxiety is very real, and very terrifying. What if I don’t get a job in my field? What if I do and it turns out I’d rather study turtles? Oh my God I’m about to make so many mistakes because what is this world where I don’t have an advisor to meet with anymore?!

I’ve read a bunch of Buzzfeed articles on this during 3 a.m. panic sessions, and they all seem to have the same tone, “Just roll with it.” You might get a job in your field. Or you may change careers entirely. Or not. Or both.

My parents are excellent examples of this. Take my dad, for starters. He got his bachelor’s in math education and spent almost forty years working in a hospital. I doubt he ever taught a quadratic formula in his life, but there’s zero regrets for the bizarre path his professional life took. Ask him about the first major open heart surgery done in Kansas. He loves telling that story. Because he was there.

Then there’s my mom. She got her BSN to become a nurse, is a nurse, and got her master’s so she could be an even better nurse. Which she is. Mission accomplished.

So… is the point of this post to confess I’ll either end up a PR practitioner or turtle scientist ten years from now? Or both? That’d be chill.

I guess I’m realizing that, in addition to the endless Facebook posts of 22 year olds who got jobs offers from Apple with a $15,000 signing bonus, there are just as many of us sitting behind the screen going, “Well… at least I know what I’m having for dinner.”

Either way, I’ll be fine. I’ve got my pasta. Although if any of you know any good academic turtle programs, hit me up!

Does thinking about your post-grad life make you wanna scream into the void too? Tell me about it over pasta!

January 2, 2021 No Comments
PrevPreviousYou know you live in Manhattan (Kansas) when…
NextReasons Why I’ll Miss K-StateNext